Just a Quick Hello from the Peanut Gallery 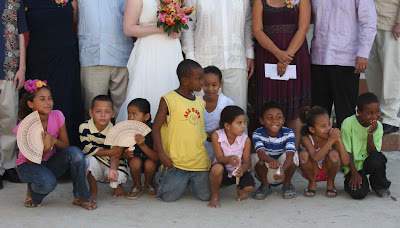 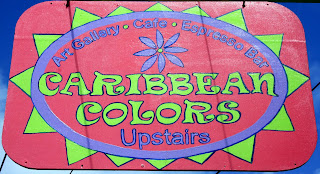 I was two years in Mexico. Two years, wow. Seems like yesterday I closed my store on Caye Caulker and was moving over the border from Belize into Chetumal during the rains of November 2008 which washed away the Northern Highway, like a refugee. Err... I mean, full time artist.
The first few months were exceptionally difficult, not speaking Spanish, and on my own most of the time. Then came the Spanish Teacher with his 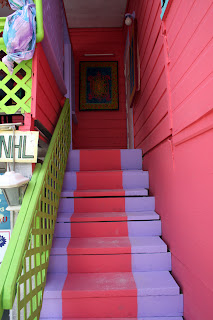 dry sense of humor chiding me "Miss Lee Ann you are scaring the people again." and "You have to deal with these people and their attitudes with your elbows out, Miss Lee Ann stick your elbows out and establish your space." and my favorite thing he ever said was "Mexicans (read: Catholics) love an apology, so start any sentence with an apology for your bad Spanish." The tutoring always started with a 1/2 hour psychiatric counseling session and ended 2 hours later with my promises to study. I am a terrible student.
Friends were few and far between. In Chetumal there really isn't an expat community, not one that I could find anyhow. Where were all the white people hiding? After two years my neighbors went from fear of the apocolypse to a grudging admiration for the white lady who could now speak her crap Spanish (after the apology) to buy a coke light at the corner store.
I would be exaggerating if I said I did not make ANY friends at all. I was accustomed to meeting new, interesting people every 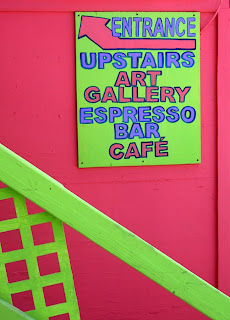 day on Caye Caulker. After a couple of months I met a couple of cool Belizean ladies living in Chetumal, an American retired real estate agent (soon to move to Corozal) and an American lady living in Corozal who had loads of tips and tricks for traversing the border, essential info for me moving to and fro as I was. And that was it. Four ladies in two years. I found myself going to Chedraui and walking around with my shopping cart looking to bump into English speakers. That worked, but mostly I was beggining to be the weird American lady. As if...
And then came the dengue fever. 14 days sick with it, 10 days on my own, too sick to get out of bed, too sick to go to the doctor, high fever, rash, swelling, constant nose bleed. Trying to stay asleep as much as I could until it passed, IF it would pass. And then not feeling better after it passed, exhaustion, I found out that I had developed a heart problem, an arrhythmia, or irregular heartbeat. The depression that followed, made me realize that I NEVER wanted to be in that 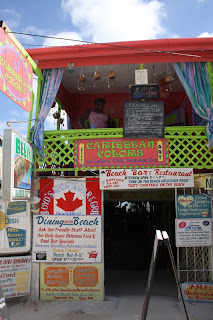 predicament again. I began to wonder if I needed to be on an antidepressant. But Ifelt like my depression was the situation, and I was the ony one that could change the situation. Alone in a foreign country, few friends, no one checking on me. Isolation. And while the isolation was good for me to be able to create new things, to have the mental space. I can't handle continual isolation. Who can? Ask someone coming out of solitary confinement.
So, I packed it in, and packed it up. Carload by carload and boatload I moved back to Caye Caulker, and still have some belongings in Mexico strewn across the city with friends. The last time I moved I said "I will never own this much junk again." and here I was, packing up boxes of all my "good stuff." I had decided to reopen my store in the Alamina Beach House apartment, which is located above the Sports Bar (next to the Police Station) It is the same property where my store was before, just in a different location in the building. 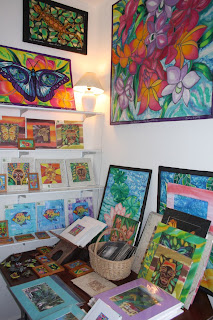 I got a lot of encouragement from my artist friends and other gallery owners in Belize to reopen. A good friend in San Pedro talked at length with me and told me some of her back story, which I didn't know. It was a story about having to pull herself up out of the toilet over and over, and reinvent herself, and to isolate the people that are making you crazy.
The biggest gift came early though. I am going to be 50 on November 25 (yes I am a turkey baby) and a friend here on Caye Caulker loaned me her handyman for 2-1/2 days as an early birthday present. So, Lenny painted and hammered and painted and hammered. Thank you Doris. This same friend also came over nearly every day to make sure that I had changed out of my PJs, taken a shower, combed my hair and made progress. She doesn't know that I know what she did, so don't tell her that I know she was checking up on me, but friends like that I am grateful for.
The first couple of weeks back on Caye Caulker, people who had heard of my demise, were surprised and pleased to see me. I 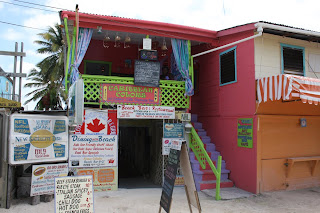 simply told them "I am hard to kill." and wiggled my eyebrows, and then did the crazy eyes thing I am so good at.
Two years in Mexico made me realize that I need my people, even if the people on Caye Caulker are nosey and interfering. As I put on my old tear up clothes with 1/2 the fringe missing, nobody looked at me sideways.
So I got Shirlene to come back to work for me again. We are like Thelma & Louise, except we ar 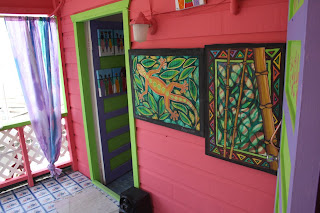 en't going to commit suicide at the end of the movie.
I have very few regrets in life, and I don't regret closing the old store in 2008 and moving to Chetumal. It was an essential part of the journey.
But it appears that you CAN go home.
If you're confused about where I am, follow the pink. 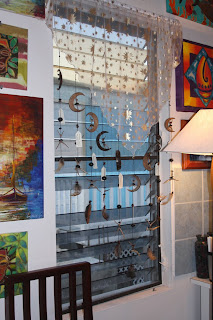 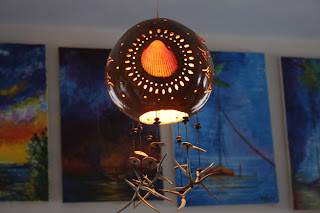 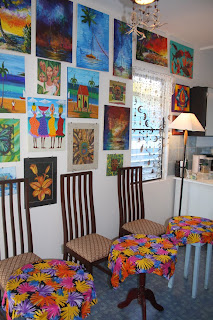 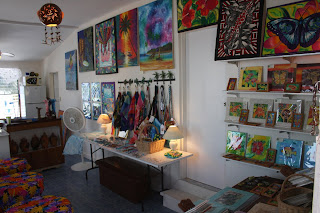 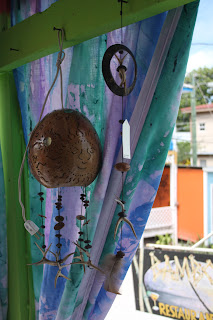 What's in a Name?

I recently referred to someone as a "douche bag." Not to their face of course, because then I couldn't have the satisfaction of having a passive aggressive rant behind their back. The name fits. This person is irresponsible, a jerk, selfish, and in general a jerk. Whopsydaisy, I used the word jerk twice. Now, I know what a douche bag is in real life. Its a very clever invention for cleaning your tarantula. But the use of it to describe a person and their behavior, where did that come from? Any of you experts on word or phrase origin, feel free to pipe up.
I found this interesting urban dictionary entry: meaning of douche bag
Posted by Caribbean Colors Belize at 11/05/2010 01:12:00 PM 2 comments: Links to this post

Caribbean Colors Belize
I was a woman on the verge of a nervous breakdown before I retired at the age of 40 and moved to Belize (17 years ago). I live 20 miles offshore on a teensy weensy tiny island called Caye Caulker, where I have an art gallery and healthy food cafe featuring my art, silk scarves, jewellery and local Belizean artists. Now, I'm a woman living in the moment accepting all the gifts that the universe has to offer.